led blog
You are here: Home / led blog / Industry News / How real is the threat of cyber attacks on 'smart' lighting? 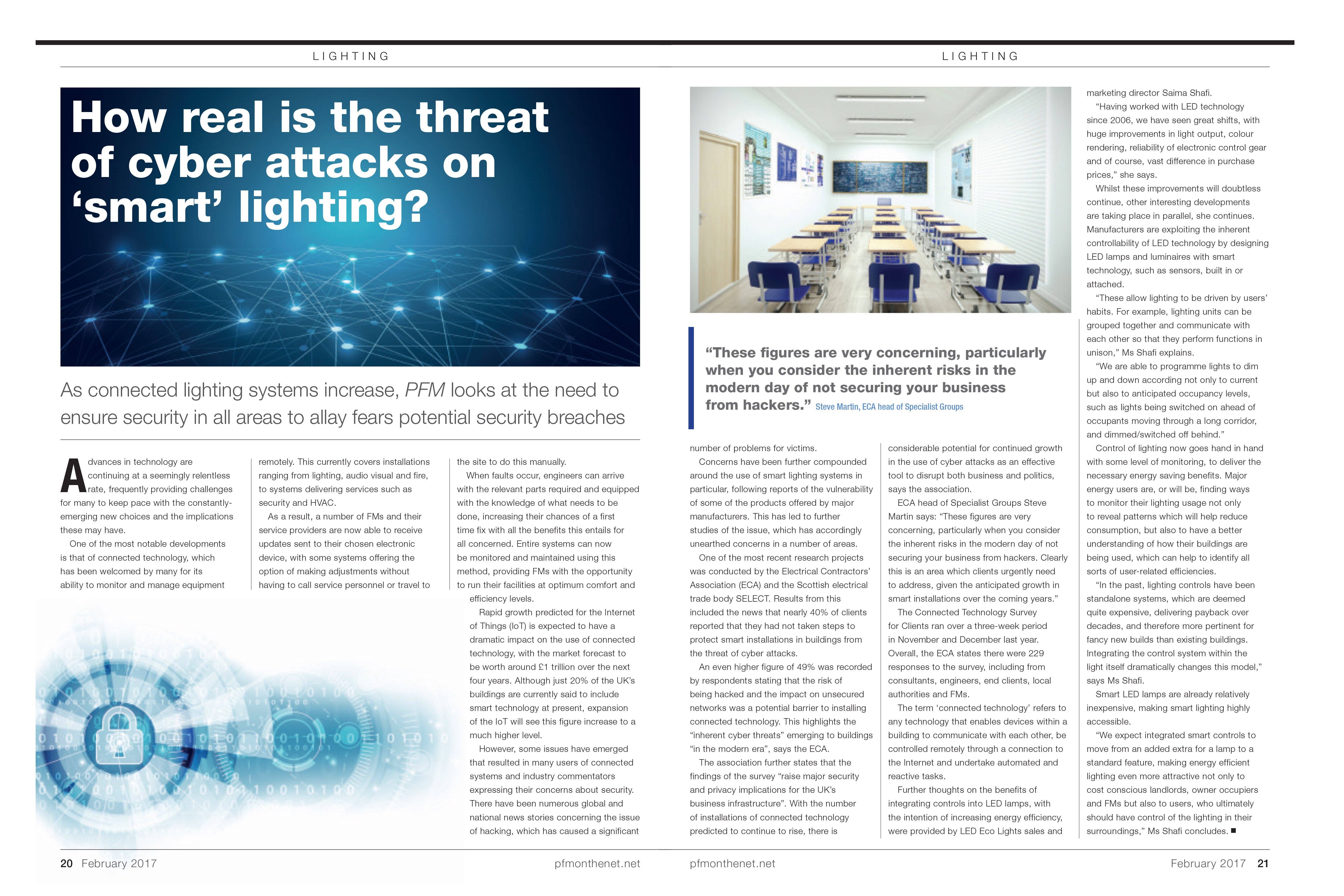 As connected lighting systems increase, PFM looks at the need to ensure security in all areas to allay fears potential security breaches.

Advances in technology are continuing at a seemingly relentless rate, frequently providing challenges for many to keep pace with the constantly-emerging new choices and the implications these may have.

One of the most notable developments is that of connected technology, which has been welcomed by many for its ability to monitor and manage equipment remotely. This currently covers installations ranging from lighting, audio visual and fire, to systems delivering services such as security and HVAC.

As a result, a number of FMs and their service providers are now able to receive updates sent to their chosen electronic device, with some systems offering the option of making adjustments without having to call service personnel or travel to the site to do this manually.

When faults occur, engineers can arrive with the relevant parts required and equipped with the knowledge of what needs to be done, increasing their chances of a first time fix with all the benefits this entails for all concerned. Entire systems can now be monitored and maintained using this method, providing FMs with the opportunity to run their facilities at optimum comfort and efficiency levels.

Rapid growth predicted for the Internet of Things (IoT) is expected to have a dramatic impact on the use of connected technology, with the market forecast to be worth around £1 trillion over the next four years. Although just 20% of the UK’s buildings are currently said to include smart technology at present, expansion of the IoT will see this figure to increase to a much higher level.

However, some issues have emerged that resulted in many users of connected systems and industry commentators expressing their concerns about security. There have been numerous global and national news stories concerning the issue of hacking, which has caused a significant number of problems for victims.

Concerns have been further compounded around the use of smart lighting systems in particular, following reports of the vulnerability of some of the products offered by major manufacturers. This has led to further studies of the issue, which has accordingly unearthed concerns in a number of areas.

One of the most recent research projects was conducted by the Electrical Contractor’s’ Association (ECA) and the Scottish electrical trade body SELECT. Results from this included the news that nearly 40% of clients reported that they had not taken steps to protect smart installations in buildings from the threat of cyber attacks.

An even higher figure of 49% was recorded by respondents stating that the risk of being hacked and the impact on unsecured networks was a potential barrier to installing connected technology. This highlights the “inherent cyber threats” emerging to buildings “in the modern era”, says the ECA. 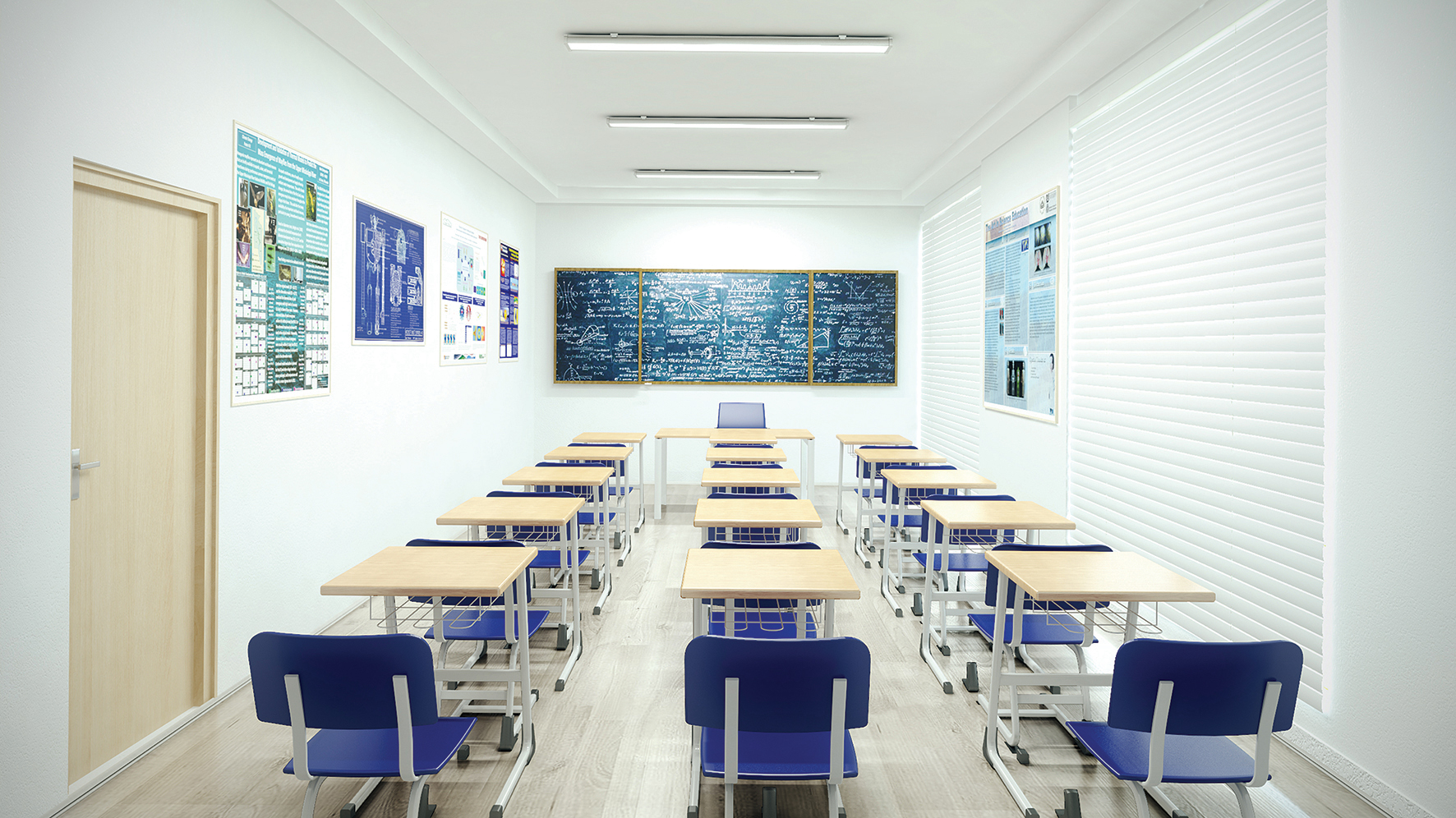 The association further states that the findings of the survey “raise major security and privacy implications for the UK’s business infrastructure”. With the number of installations of connected technology predicted to continue to rise, there is considerable potential for continued growth in the use of cyber attacks as an effective tool to disrupt both business and politics, says the association.

ECA head of Specialist Groups Steve Martin says “These figures are very concerning, particularly when you consider the inherent risk in the modern day of not securing your business from hackers. Clearly this is an area which clients urgently need to address, given the anticipated growth in smart installations over the coming years.”

The term ‘connected technology’ refers to any technology that enables devices within a building to communicate with each other, be controlled remotely through a connection to the internet and undertake automated and reactive tasks.

Further thoughts on the benefits of integrating controls into LED lamps, with the intention of increasing energy efficiency, were provided by LED Eco Lights sales and marketing director Saima Shafi.

“Having worked with LED technology since 2006, we have seen great shifts, with huge improvements in light output, colour rendering, reliability of electronic control gear and of course, vast difference in purchase prices,” she says.

Whilst these improvements will doubtless continue, other interesting developments are taking place in parallel, she continues. Manufacturers are exploiting the inherent controllability of LED technology by designing LED lamps and luminaires with smart technology, such as sensors, built in or attached.

“These allow lighting to be driven by users’ habits. For example, lighting units can be grouped together and communicate with each other so that they performa functions in unison,” Ms Shafi explains.

“We are able to programme lights to dim up and down according not only to current but also to anticipated occupancy levels, such as lights being switched on ahead of occupants moving through a long corridor, and dimmed/switched off behind.”

Control of lighting now goes hand in hand with some levels of monitoring, to deliver the necessary energy saving benefits. Major energy users are, or will be, finding ways to monitor their lighting usage not only to reveal patterns which will help reduce consumption, but also to have a better understanding of how their buildings are being used, which can help to identify all sorts of user-related efficiencies.

“In the past, lighting controls have been standalone systems, which are deemed quite expensive, delivering payback over decades, and therefore more pertinent for fancy new builds than existing buildings. Integrating the control system within the light itself dramatically changes this model,” says Ms Shafi.

“We expect integrated smart controls to move from an added extra for a lamp to a standard feature, making energy efficient lighting even more attractive not only to cost conscious landlords, owner occupiers and FMs, but also to users, who ultimately should have control of the lighting in their surroundings,” Ms Shafi concludes. 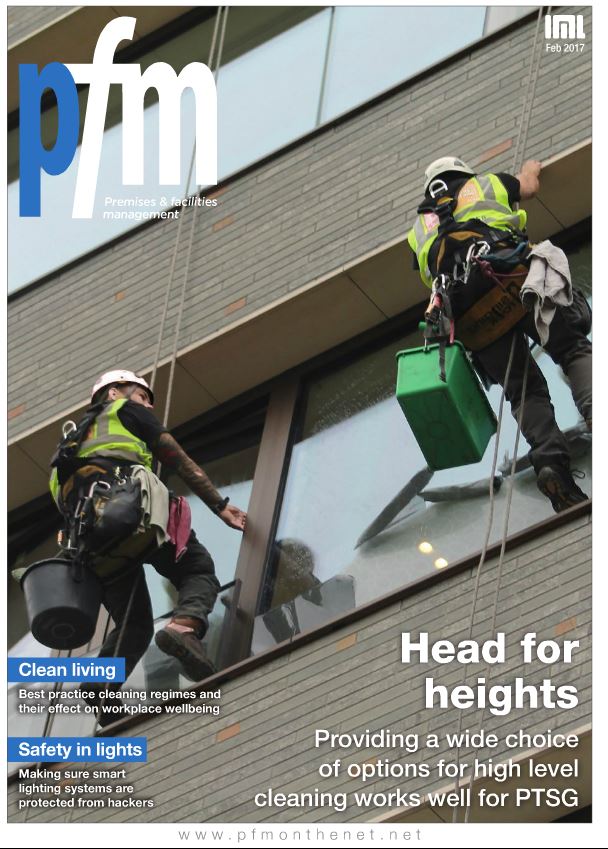 The brightest, most efficient option when upgrading to LED
Scroll to top