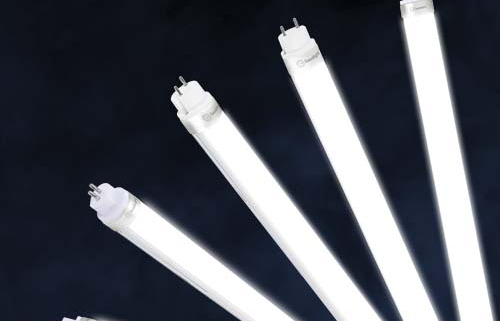 Existing fluorescent tubes can now be upgraded instantly to long lasting, energy efficient, LED lighting with Goodlight InstaFit Plug and Play LED Tubes that slot straight into existing fittings without rewiring or the need to remove the ballast. The Goodlight InstaFit Plug and Play LED Tube range works with all driver types including HF, Electronic, Magnetic and direct to the mains. These instant fit Plug and Play LED Tubes drastically reduce installation time and eliminate maintenance overheads. With energy savings of more than 75% and maintenance costs all but eliminated, this exciting new range is suitable for internal application including offices, commercial, display and retail, industrial, cold storage and refrigeration and amenity lighting.

The Goodlight InstaFit Plug and Play LED T8 and T5 Tubes are brand new to the market and feature a translucent polycarbonate lens cover. Once installed, they look exactly like a fluorescent tube but are much brighter, providing even light spread with no shadowing or flickering. Available in 2ft, 4ft and 5ft lengths, these new LED InstaFit Plug and Play Tubes are also offered in a range of colour temperatures including Daylight (6,000K), Natural (4,000K) and Warm (3,000K).

Commenting, Saima Shafi, Sales and Marketing Director at Goodlight said, “There is now absolutely no excuse for not replacing fluorescent lighting with more efficient, lower energy LED replacements. Fitting a Goodlight InstaFit LED Tube is as quick and easy as just fitting another fluorescent tube – and brings long term savings in terms of energy and maintenance costs. We’re definitely seeing customers moving this upgrade from their ‘do it sometime’ to their ‘do it now’ lists.”

The retrofit range of robust, impact-resistant and glass-free InstaFit Plug and Play LED Tubes replace standard T8 and T5 fluorescent tube fittings and operate independently of external control gear. The InstaFit T8 LED Tube is also a true LED retrofit replacement for T10 and T12 fluorescent tubes as well. They deliver up to a remarkable 150Lm/W output from their 140° beam angle, providing a wide, adequate spread of illumination and are protected to IP20. They are housed in a stylish aluminium and polycarbonate body and operate in temperatures between -40°C to +50°C.

Saima Shafi continued, “We are thrilled to extend our LED tube offering to include our new InstaFit Plug and Play LED solution. Goodlight has been renowned for its LED Tube range since 2008, which have been specified for the Co-Op Food Group, Jaguar Landrover, Sainsbury’s, Superdrug, TFL and many more. Where fluorescent tube lighting is commercially installed in volumes, customers need reliability, quality and consistency from the LED equivalent to consider wholesale upgrade to capture the most benefits. We now stock the widest T5 and T8 LED Tube range on the market, supporting a diverse range of applications, including DALI Dimmable, 3 Hour Emergency, Driver-less for DC Operation, High CRI and now, InstaFit Plug and Play.”

Rated for 50,000 hours and supported by a five-year guarantee against failure, the new InstaFit Plug and Play LED Tube range qualify for pay-as-you-save purchase through programmes, such as the Bright Plan Funding Scheme, allowing businesses to fund the cost of a new LED lighting upgrade through monthly energy savings.

Learn more about the Plug and Play LED Tubes here

Sign-up to get the latest news straight to your inbox.
Give it a try, you can unsubscribe anytime.